If you basically grew up on the film set, you would obviously end up in the showbiz industry and so did Lilah Pate, daughter of Jonas Pate who is not an unknown face in the television industry. Born on September 29, 2003, Lilah is an American actress best known for her roles in The Summer I Turned Pretty and Outer Banks.

Her father is originally from Wilmington, North Carolina, and is a writer and director of the award-winning Best Screenplay film Deceiver, the thriller film The Grave, and many more. In fact, he is also the creator and executive producer of Netflix's hit, Outer Banks in which Lilah starred as Peeler.

Lilah Pate Made Her Debut At The Age Of 10; Her Weight loss Journey. 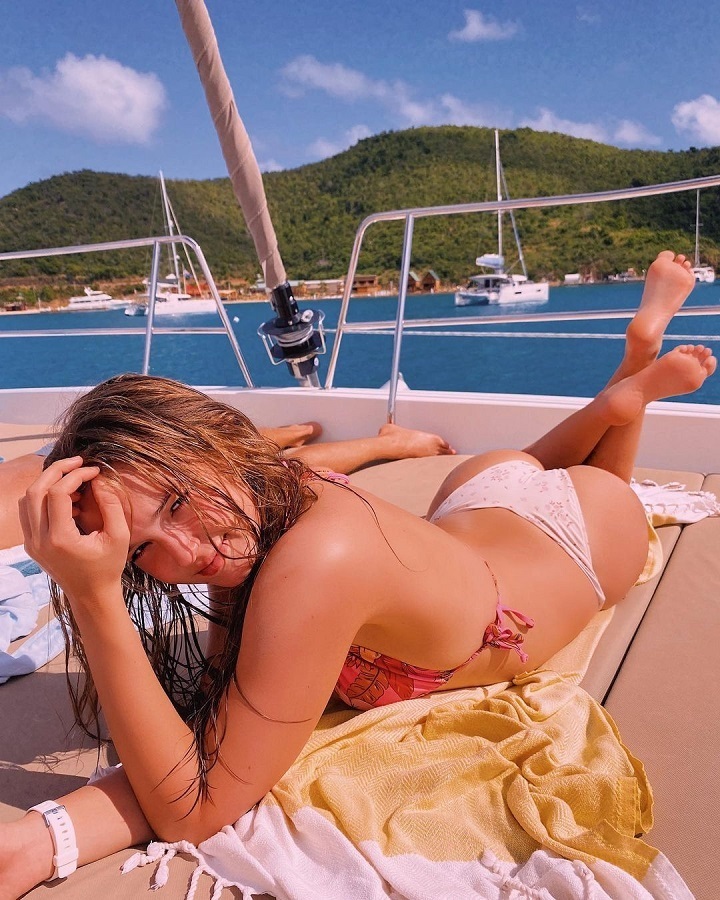 Lilah Pate made her professional debut through the TV series Deception where she portrayed the role of Larissa Harrison just at the age of 10. However, she got her big break after starring as Peeler in the American television series Outer Bank which won numerous awards including the People’s Choice Award and MTV Movie & TV Awards.

Besides, the brown-eyed actress has been slaying the role of Gigi in the Amazon Prime romance series The Summer I Turned Pretty since 2022. This romantic drama television series is based on a novel of the same name written by American author Jenny Han which also stars other actors like Lola Tung, Jackie Chung, Christopher Briney, Minnie Mills, Summer Madison, Sean Kaufman, Rain Spencer, and so on.

Similarly, Pate is set to play the role of Ellie Evans in the family adventure film, Boys of Summer which is set to release in 2022. Her father may have paved the way for her in the show biz, but it was her acting skills that helped her to make a name in the industry.

Meanwhile, if you have been following Lilah Pate for quite some time, then you may have surely noticed that she has lost a lot of weight. And the actress herself admitted that she went from 199Ib to 122Ib within seven months. Even though she promised to share the secret behind her weight loss transformation in April 2021(including her diet plan and workout routine), it seems like she has long forgotten about it.

Lilah Pate’s Boyfriend: She Has Already Found Her Soul Mate At Such A Young Age.

Talking about her love life, Lilah Pate is in a committed relationship with an athlete Jax Croom. Unlike her fellow co-star Minnie Mills, the 5ft 6 inches beauty has made her relationship public since they started dating back in May 2020. The lovebirds are inseparable and are always together everywhere be it on prom, on vacations, or working out. Her fans are obsessed with couples as they don't leave any occasion to their cozy pictures on their couple fan page accounts.

How much is the Net worth of Lilah Pate?

According to the estimating source, Lilah Pate holds a net worth of $200,000 thanks to her impressive acting career. Though she has managed to bag a few movies and tv shows, she has left a remarkable mark with her talent and versatile roles.

Lilah Pate made her debut in the entertainment industry back in 2013, portraying the role of Larissa Harrison in the American prime-time soap opera television series, Deception. However, after her first series, she then took a break from the industry for over seven years for some unknown reason.

Also Read: Is Rian McCririck Dating 'The Baby-Sitters Club' Co-Star Xochitl Gomez? What Is His Net Worth?

Even after disappearing from the industry for so long, Pate managed to attract fans with her acting in the Netflix hit, Outer Banks. She then appeared in another hit series, The Summer I Turned Pretty, and is now set to appear in the thriller film, Boys of Summer.

Being an actress, Lilah also has garnered an impressive fan base on social media platforms like Instagram and TikTok which is another stream of income (from sponsorships and brand endeavors). With over 458.9K followers on TikTok (@lilah.pate) and 205K followers on Instagram (@lilah.pate), she makes an average of $350  per post from TikTok and $800 per sponsored post from Instagram.