Here's how the story of Tom Oar goes, how he transitioned from being a cowboy to brain tanning and starring on 'Mountain Men', who his family is, and how he earns his net worth.

"I guess I was born 150 or 200 years too late," says Tom Oar, a former cowboy who decided to leave all the modern razzle-dazzle behind to let his life take its course in the wilderness. At 78, he's still doing it.

Born in 1943 in Rockford, Illinois, Tom Oar is perhaps known for his lead in History Channel’s Mountain Men since 2013. He lives in the middle of the Yaak River Valley in Northwestern Montana with his wife Nancy, and the more his popularity grows, so does his impatience with more people invading his territory, although with no ill intent as his fans.

As one can imagine, Oar chooses to live on whatever nature can provide for him, and as part of being self-sufficient, he keeps some endangered traditions alive, like trapping, harvesting his own meat, and brain tanning, something even the Native Americans, whom this technique comes from, don't do these days. These unique things have flooded his recognition worldwide.

Tom Oar's wife Nancy has been with him for the most part of his solitary life, living out the majority of his early life around rodeos and trick riding since the age of 7. In midst of their professional career, they often visited Montana in the summer to rodeo. When they felt that they were done with that life, they moved to where they always wanted to, taking inspiration from the 1800's icons Joe Meek and Jim Bridger. We don't know if his dog, Elli, a German shorthaired pointer, is still around or not.
Photo Source: Twitter

Unfortunately, he couldn't end it in style. He was climbing the ranks of the International Rodeo Association in the 1960s until he suffered a near-death experience at 35 in the arena literally under the legs of a bull called Woolly Bugger. He came back after a month but was never able to reach his former heights. The realization soon hit him and retired from rodeo in 1981. He had already bought a chainsaw in Illinois and moved to Montana with Nancy by the time he retired.

Also See: How 'The Curse of Oak Island's Marty Lagina Became a Multimillionaire

It took the pair 5 years to build the house they now live in themselves. They lived in a two-room cabin that was in the one-and-a-half acre land they had bought when their house was under construction. They call that land their home for over 40 years now and live in the same house since it was completed all those years ago.

How Tom Oar Collects His Net Worth: A Book on Brain Tanning Turned His Life Around

Of course, with a new lifestyle, especially the one Oar chose, there were second doubts in the couple's minds early on about the life they started living. They lived off trapping and hunting for a while. They were finding it hard to survive off the trade he experienced in Illinois but never learned to earn from it.

However, their lifestyle turned around when they entered a Native American store in Billings. They found a little 16-page book that explained how the Native Americans brain-tanned. It was rare even at that time and with a little bit of luck, he was ready to turn it into a lucrative business. All of his products are made by hand; they don't even use sewing machines.
Photo Credit: Nathan Satran for Eden Prairie Lifestyle

"Black Powder Rendezvous, they called them,” Oar told City Lifestyle a while back. “They were recreations of the old fur-trade days in the Rocky Mountains when all the trappers would meet in one spot."

You won't find his first-hand products online. Tom Oar's only market is any one of these rendezvous, but the sales have increased since his involvement with Mountain Men.

The $3 book was a huge discovery for the 78-year-old, and his handmade wares, such as the brain-tanned hides, were even more so for his buyers. The husband-wife started selling well soon enough, and they continue to do it even still.

Recommended: Skinwalker Ranch Owner Brandon Fugal Is Married. Who Is His Wife?

As humble and open-minded as he is, Oar also controls a modest estimated net worth of $400,000. Mountain Men doesn't bother him much; the only difference is the cameras around them and of course, all the additional demand of orders he gets from his popularity through the show.

In an interview with American Cowboy, the former cowboy mentions he goes to one or two rendezvous a year and earns around $3000 to $4,000 each time. Oar also points out that he gets paid by History Channel for the show but doesn't want to give up the trade. But it is a relief to not completely rely on the trade for a living.

Tom Lost His Only Daughter in 2015, and His Former Partner Passed Away in 2018

Adapting to the changing lifestyle isn't the only struggle Tom has to deal with in life. In fact, the loss of his only daughter has to be the most difficult time of his life. Because a parent losing their child is far worse a feeling than the other way around. The show has made it plenty clear that he has a loving family. Aside from his wife, his son Chad Oar also made a few appearances on the show. A divorced father of two of Tom Oar's grandchildren, Tanner Oar and Tara Oar Nener, Chad and his girlfriend Kim Burnett own Carriage Tours of Ocala in Florida. She'd been training and selling horses there long before this relationship.

The Full Reveal: How Is Peter Fornetti Related to the Laginas?

Tom's daughter, Keelie Oar also featured on Mountain Men back in 2014. Also born in Rockford in 1966, Keelie moved to Florida in 1986 and lived there until she passed away in April 2015. She was 49 at the time, and there was no mention of her cause of death. According to her obituary, Nancy was not her mother. Nancy has been with Tom for over four decades.
Photo Source: Mountain Men, Twitter

Tom had a previous relationship with both his kids' mother, Janice "Jan" Frazer, before Nancy. Jan also passed away in April 2018, at the age of 76. She was married to David Frazer for 22 years before her death. The aforementioned obituary also mentions Keelie's grandmother and Tom's mother as Mary Jane Crellin who also appeared in Mountain Men in 2014. There's no record of her passing though, meaning she could be over 100 years old by now.

Tom also has an older brother he grew up trick riding with, Jack Oar, who also appeared on Mountain Men. But his father who passed on his horsemanship to the boys, Chike Oar, is no more.

Is Tom Oar Dead? What Happened to Him?

It's all the buzz about Tom Oar right now. It's not that some fans think he's dead, but they want to know if their favorite mountain man. There were a few reports recently online that his death was announced on social media in mid-May, but none of them are at all reliable and verifiable. And even if it was true, there was no way the fact would be so oblivious to the world.

History Channel has not acknowledged anything from the Oar family yet, and there are no obituaries set up for him either. Like Curse of Oak Island often does, there would be tribute posts from his show's social media accounts and fan pages. 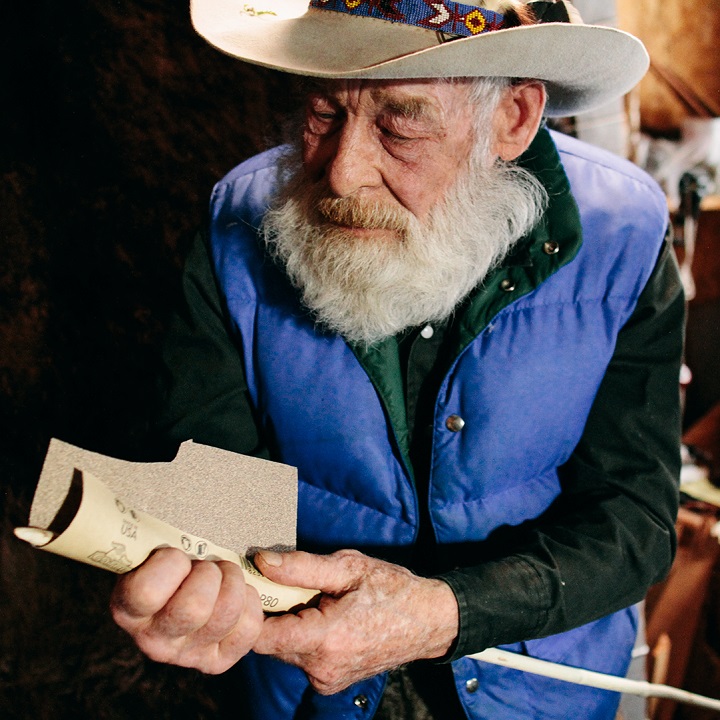 Unlike his cowboy ropes, he doesn't seem to want to hang up his coats to live a modern life.
Photo Source: Mountain Men, Twitter

So, until there is an official confirmation, fans would definitely like to see his newer adventures with the show in the future. After all, he is returning to feature in the latest season of Mountain Men on History Channel in June 2021. Yes, there are expectations. Season 10 of the show for their latest premiere was filmed in the winter. Of course, the likes of Eustace Conway, Mike Horstman, Jake Herak, Josh Kirk, Martha Tansy will return too.

There were talks of Oar retiring from the wilderness though. A lot of times too. His son lives in St. Petersburg, Florida, and according to American Cowboy, he and Keelie reportedly discussed moving Oar to Florida as well, out of the wilderness, back in 2013.

After This: Here's How the Story of 'Rocket City Rednecks' Travis Taylor Goes.

However, Oar's spotlight was just coming closer to him, and there was little chance of him giving up on what he loves to do. The reports still hover around that he's moved to Florida, which he hasn't, and it is highly unlikely. Instead, "I keep telling Nancy, one of these days you’ll probably just find me stretched out dead over the fleshing block," he told the publication.

There are some things he would rather not deal with too. With Mountain Men, the recognition he'd gained often gets fans coming to meet him at his home for pictures and whatnot. While the humble and overall nice guy is open to such approaches, he does feel it brings about a lack of privacy. And moving to Florida would be even more difficult to live without the attention he gathers. 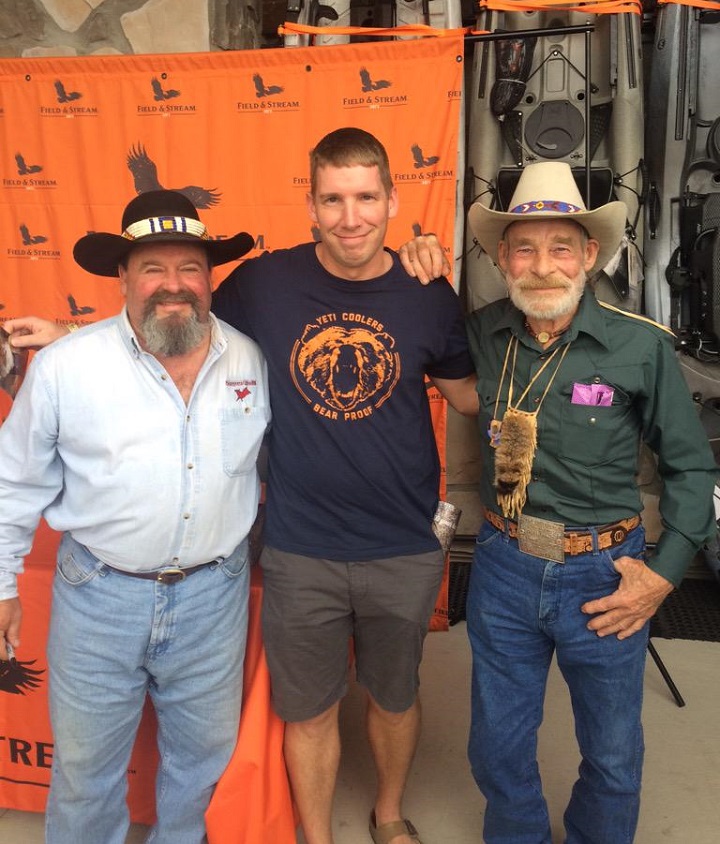 He'll never say no to anyone's request to talk to him.
Photo Source: Travis S., Twitter

"We had over 300 people that came to our house last summer to take our picture and shake our hand," Oar told Chris Swecker of WVLS in February 2019 ahead of the Western Virginia Sport Show at Augusta Expo in Fishersville. "We had honeymooners here two years ago from Switzerland! You know, it’s crazy!"

So there are a few times he makes rare appearances and he always accepts an invitation to talk to any publication or radio host there is, but it seems he is not willing to let go of this trade until he is physically not able to do so.