Despite joining The Real Housewives of Orange County gang alongside Braunwyn Windham-Burke in its 13th season in 2018, Emily Simpson still comes out like a rookie on the set with a mediocre net worth. But everyone knows she’s tough. That falling out with once-close-friend Tamra Judge and fighting back against the veteran’s claim that she is not fit for RHOC got real. It still isn’t likely to stop.

Born on January 19, 1976 [age 44], in Ohio, Emily had a troubling childhood. Her parents’ divorce did not end in good terms, and she had to see her mother suffer, who was a victim of depression. But after years of perseverance and finding love in her husband, Shane Simpson, the once-broke mom stands strong on her feet. Yes, before she started her job as an attorney, she was kind of poor. As for memorabilia, she keeps her cheap (in comparison to her castmates’) wedding dress in her closet. The more amazing thing is that Shane is also an attorney, and thus, they have a good understanding of each other. Since she is still new to RHOC, her net worth is not great in comparison but still commendable.

As of January 2020, Emily Simpson has a net worth of $900,000 in estimation. Her job as an attorney and a part-time party planner pay quite well. But her biggest source of income has got to be her salary on Bravo TV. Being a newer member of the show, she isn’t expected to be paid much, but a general payout per season for a new Real Housewife is certainly around $100,000. Thus, an update to last year’s net worth of $800,000 puts her current wealth to $900,000, with expenses accounted for. In comparison to the other current cast (maybe reshuffled according to current news), Simpson has the lowest net worth value of all. But considering she started out her career path with a poor bank balance, being an almost-millionaire is something she should take the utmost pride in.

Unlike Others, Emily Was Not a Full Stay-at-Home Mother – Her Jobs

There are a lot of things the 44-year-old has to juggle around in life — multiple jobs, kids, and reality stardom. She does it ever so gracefully and wants to show she can handle every aspect of it just as so. Besides appearing on RHOC, she is also a copyright attorney and a party planner. She took the latter as a part-time job so as to fend for her children. 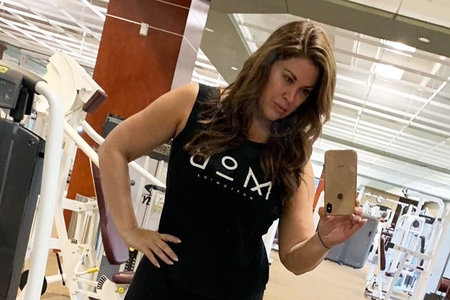 Emily even takes summer off from the job so that the kids have plenty of time to spend with her.
Source: Emily Simpson

The star graduated from Thomas Jefferson Law School in 2005, and immediately after, she started working as an attorney. She is currently employed by the Law Firm of Higbee & Associates after previously working as a family law and paralegal associate for them. As is noted already, her husband Shane also is an attorney. The two previously worked together as associate attorneys at Pranno Law in Salt Lake City, Utah.

According to the husband’s LinkedIn profile, Shane works as a claims investigator with APEX Investigation since 2015. He also worked as an associate attorney for Simpson & Simpson Law in Lehi, Utah, while also being a real estate consultant at DPFG in San Juan Capistrano, California and an investigations manager for Target in Orange County, California before that.

Emily & Shane Getting a Divorce? No. Here’s Why She Was Not Wearing Her Wedding Ring

For Emily, the 14th season revolved around the on-screen drama with her husband (aside from the beef with Judge). On several Instagram photos in October and the BravoCon in November, she did not have a ring on her wedding finger. Viewers tried to put the pieces together and figured out there may be problems brewing in the Simpsons family. But they were all wrong. There ain’t no trouble in paradise for the husband-wife.
Photo Extracted: Emily Simpson, Instagram

During her November appearance on Watch What Happens Live, she was asked why she was not wearing her wedding ring. It was then that she clarified she had lost her wedding ring and doesn’t particularly wear it. Even Shane wasn’t sure if he even had one. Emily told him he did, but it is nowhere to be found.

The talks of divorce were further shut down after Shane professed his love for Mrs. Simpson and the family on the RHOC Reunion special past late-December. It even left Beador shocked. “Well, what isn’t there to love? She’s smart. She’s beautiful. She’s a wonderful mother. She helps me with my two older children,” he told host Andy Cohen.

When asked if he has regrets over anything he did or said on the show this season, he found it hard to search for something he does regret. But he still admits he could have done certain things better.

RHOC‘s Emily Rebecca Simpson married Shane Simpson on February 14, 2009, and just celebrated their decade-long milestone last year. A pretty smart wedding date. And the marriage shows why the date was perfect for the two. They raise five kids together. Two of them, Shelby Simpson and Chanel Simpson, are older step-daughters for Emily, but Shane believes she has become like a godmother to his daughters rather than a stepmom. The other three kids are daughter Annabelle Simpson, and younger twin brothers Luke and Keller Simpson. It was not easy for them to have kids together though. After years of trouble with fertility and pregnancy, her sister Sarah was the one who surrogated the latter three kids for her.

Surely You Didn’t Miss the House Tour Given by Emily

In the Season 13 Episode 3 of RHOC, Emily showed the viewers around her Orange County home. It is very spacious with plenty of dedicated rooms for her shoes and dresses. The dining room has a grand piano. The kitchen is connected to the living room for an open-concept home. Since she is busy with her jobs and taking care of the kids, she seldom cooks. If she can’t cook, she asks her husband to bring food on the way home.

The backyard has a patio with a seating area, kitchen, grill & bar and a fire pit. A “spool”, as they like to call the half spa, half pool, includes a waterfall feature.

Among Emily’s several party clothes, there’s a particular one in her huge walk-in closet she would never wear it — her wedding dress. But considering her plan to renew vows with her husband, she might wear it again for one more time.

Of course, every woman would keep their wedding dress so that they could pass it on to their daughter. But this one was sentimental for Emily because she had to cut up budgets during her wedding to Shane due to their financial weakness back in the day. She bought it for $100 from Nordstrom, literally at a department store.

Shane drives a Tesla. So do their younger kids. They’re already learning to drive in mini-Teslas which are all battery-powered. She posted videos of them driving line-by-line on Twitter and Instagram last January.

Until Bravo announces the new main cast, there is a tight chance one of the six main housewives may have to step down. Gunvalson might be promoted back, but it seems there may be a new member on the show. Until then, Emily knows she can stand her ground. She won’t be afraid to let anyone take her place. And of course, fans absolutely adore her.

Keep visiting celeb$fortune for more Celebrity Net Worth updates. We’ve got some interesting stories to tell.