As only the second housewife to survive through 12 seasons of The Real Housewives of Orange County, Tamra Judge has been the center of attention to almost everything that happens on the set. She joined RHOC in its third season in 2007 after her introduction in late 2006, so she knows how to stand her ground.

Born on September 2, 1967 [age 52], in Greendale, California, as Tamra Sue Waddle (maiden name), she joined the show as Tamra Barney since she was married to Simon Barney at the time. But she made the name change after she got married to Eddie Judge in a 3-episode wedding series of her own at RHOC. They're still going strong despite the awkward incidents in the household. Judge is also a Grandma with a Granddaughter!
Source: Bravo TV

Being one of the earliest members of the show, it is obvious her besties would be the first members of the show — Vicki Gunvalson from the first season and Shannon Beador, who joined years after she first started. As a series regular for a long time, she is expected to rake in quite a lot. But it's been conflicting over how much she earns as the Salary or her Net worth values. There've been reports of different salaries, less than you'd expect, but no documents to prove it.

Tamra Judge's Net Worth of $3 Million May Have Increased This Past Season - RHOC Salary, Income Sources & Comparison

The net worth of Tamra Judge is estimated to be $3 million as of January 2020. But her salary from RHOC would make you think otherwise. Plus, she is also an entrepreneur, for which her money comes from her fitness endeavor while also earning from another business on the side. 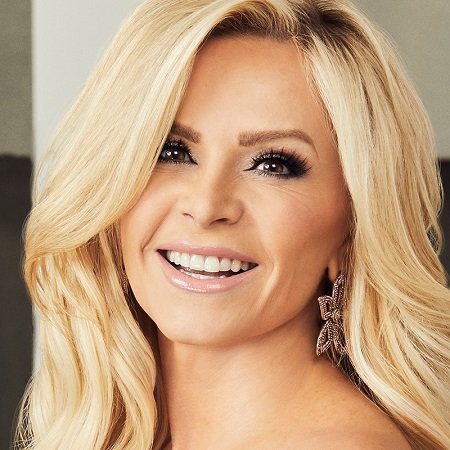 Tamra Judge's net worth might be an underestimation.
Source: Bravo TV

Originally, Judge's salary was listed as $600,000 per season (an updated report has her salary at $900,000 per season), meaning the $2 million is still an underestimation. But somewhere else, the value per season was reported as $350,000 per season, which would make her net worth a fair value for all the 12 years she's appeared on the show. Still, the fitness consultancy fortune hasn't been accounted for. Even weirder is that, based on the latter salary, her net worth has been estimated to be $800,000 by several outlets (even the reliable ones).

The net worth value for her, hence, lies in the lower bracket among the current housewives, but it's still up for debate. For the comparisons:

The 52-year-old was briefly married to her first husband, Darren Vieth, with whom she had her first child, Ryan Vieth. They divorced in 1990, and Tamra willingly handed Ryan's custody to Veith in 1995 since she was reportedly broke at the time. But years later, there've been a lot of accusations thrown both ways. Even Ryan believes Vieth was not a father figure, which he instead saw in Tamra's second husband, Simon Barney. The reality star married Barney on May 23, 1998, and the marriage was smooth sailing until she joined RHOC. They had three children together, Sophia, 13, Spencer, 19, and Sidney, 20, all of whom she had an estranged relationship with. But it seems the ex-family is mending fences with Tamra having a better relationship with Barney. There were many accusations in that marriage too.

Barney filed for divorce in January 2010, which would lead to an ugly custody battle until it finalized in 2011. He claimed Tamra cheated on her, but she denied it. They agreed on co-parenting together, but Sidney never left her father's home. Later, Barney filed for full custody on account of the claim that she was 'very neglectful' in caring for the children. But it was ultimately denied. After the divorce papers were filed, she got together with her now-husband Eddie Judge and tied the knot on June 15, 2013. It was a simple ceremony with close friends and family in attendance, but it did contain some lavish details. A 5-karat wedding ring set with 368 diamonds (ring priced at $35,000), a $2,500 cake, three custom-made Mark Zunino gowns, and a pair of $6,000 shoes for Tamra were the stand out features of the wedding held at the St. Regis Monarch Beach Resort. The wedding was kind of Lavish.
Source: Vivian Zink, Bravo

The wedding was documented by Bravo in a three-episode miniseries titled, Tamra OC's Wedding. They are in a really good place right now as just the two of them are currently on a weeklong trip driving an RV for the first time. Oh! And Tamra is also a grandmother with the birth of Ryan's daughter, Ava Vieth.

The current couple opened the Cardio Unique Training (C.U.T.) Fitness in Rancho Santa Margarita, California, in 2013. Now, she is the co-owner and a fitness instructor at the gym, but she used to work in sales for a tequila company and luxury car dealer as well. She was also a real estate agent for Ladera Realtor. Fitness is also a priority for the mother-of-four.
Source: Tamra Judge, Instagram

CBD was not legal in the entire 50 states of the US, but it is now. And after their personal positive encounters with the drug-like substance, the Judges decided to enter into the business. It was part of their dog, Bronx's cancer treatment as well as the treatment for Eddie’s atrial fibrillation (AFib) heart condition.

Thus, back in January 2019, the pair launched VENA Wellness. Considering the CBD market is expected to grow to be worth around $20 billion by 2024, they've certainly hit the jackpot.

Selling Their Jinxed Ladera Ranch House for Another Lavish One

In December 2017, Tamra Judge bought their former home (her second) in Ladera Ranch for $1.585 million, the property records show. It was originally listed for $1.875 million in May 2017, but the price was later reduced, step by step.

The husband-wife felt quite jinxed with the house, and in early September 2018, they put it up for sale. It went on escrow less than a week after it was listed for $1.799 million. Then in a matter of another week or two, the pair bought their Coto de Caza home for $2.095 million. The acquisition of the six-bedroom, four-bathroom property was announced by their real estate agent, Shelly Black, on Instagram in September 2018.

Tamra Judge recently announced that she would not be returning for the 15th season of RHOC after rejecting an initial offer as a friend. It means her net worth will not be solely dependent on her fitness business and married life with her husband Eddie since she decided to live a life away from the camera for a while.

Go to the homepage, celeb$fortune, for more Celebrity Net Worth content. Or check out the Fortune Focus section for more updates.