An actress, comedian, writer as well as producer, Esther Lauren Povitsky, aka 'Little Esther', is a name to be reckoned in the cosmos of entertainment.

Born on March 2, 1988, in Chicago, Illinois, USA, Esther Povitsky was raised in a suburb of Skokie. Mary and Morrie Povitsky were her parents, and she also has one older half-sister from her mother's first marriage. As per the comedian's ethnicity, her father is of Russian-Jewish descent while her mother is a Christian of Finnish descent.

Talking about the education of the brilliant performer, she graduated from Niles North High School in 2006. She moved on to join the University of Illinois at Urbana–Champaign and studied there for three years but eventually dropped out. The reason behind her relinquishment was to pursue a career in stand-up comedy and acting.

Feeling like an outcast and deserted amidst the parties and sororities in college, the jolly comedian had a hard time fitting in. Subsequently, she studied comedy at iO Chicago and The Second City before moving to Los Angeles and taking workshops with The Groundlings which finally made her feel at home.

A multifarious personality, Povitsky has built her career in the genre of comedy with exceptional humor and presentation skills. Starting as a performer in live shows in Los Angeles, Esther performed regularly and presented acts at many comedy clubs, such as The Comedy Store, The Improv, and The Ice House. "I identify as a comedian in the back of someone's truck," Povitsky said as she performed literally on the back of a truck.
Photo Source: Esther Povitsky, Instagram

Beginning her career with podcasts, the mesmerizing speaker has various podcast channels. Podcasting DEATH SQUAD regularly with comedian Brody Stevens led her to be the first female guest to appear on The Joe Rogan Experience. Her confidence and smoothness impressed the host Joe Rogan which he had stated in a podcast, and it eventually boosted 'Little Esther's career.

Likewise, Little Esther’s Piecast, Weird Adults with Little Esther, and Glowing Up with Esther and Caroline are some podcasts hosted by the talented entertainer. With the terror of pandemic and lockdown all over the world, Povitsky took time to host her solo podcast Esther Club, where she shares her random stories, experiences, and talks on various topics. The sweet talker's soothing voice and funny content have gained her quite a lot of support and love from the fans.

Also See: Lexi Hensler Is Lesser Know for Her Attempt at Stand-Up Comedy. Get to Know Her.

Rick & Esther have a Time Sucking Each Other's Feet, Trash Tuesday (formerly Bloodbath) co-hosted with Annie Lederman and Khalyla Kuhn, and Edith! are some of the recent and happening podcasts of Esther Povitsky.

Acting: You've Probably Seen Her Here and There

Appearing in sitcoms and comedy sketches like NBC’s New Girl as Krystal in 2011, Parks and Recreation as Julie, Comedy Central’s Brody Stevens: Enjoy it! in 2013, Key and Peele in 2014 as Cassie, and Esther with Hot Chicks in 2014 has shown the plethora of talent and range of acting of the young comedian.

Her guest appearances in 2015 in the dark comedy web TV series Difficult People as Cissy Donato and the VH1’s scripted comedy faux-reality show Candidly Nicole has also been able to a remarkable mark in the field of comedy. From beginning with podcasts, sitcoms, talk shows, and sketch comedy shows, the delightful performer made her acting debut with The Express: The Foot Fetish Story in 2008 with the role of a teen model. Povitsky's acting career took off in 2010 when she appeared in April, a short film as Val Monroe. All in All (2011), The Eater (2011), and My Daughter’s Boyfriend (2014) are some of Esther's acting projects before she took a big leap.

The 5' tall Piscean rose to her fame with the comedy series Alone Together. Inspired by their experiences in real life, written by herself and co-created with her best friend Ben Aflalo, the comedy TV series starred the two as the leads. On the show, while battling with their unsuccessful job alternatives and relationships, Esther and Benji found solace in one other's company. Though the series failed to gain positive reviews, the brilliant actress took on various other projects which eventually exposed her aptitude.

Related: Brenda Song Has Made It to Multiple Hot 100 Lists: Here's How She Made Her Net Worth

Debuting in the comedy special, Hot for My Name, released through Comedy Central, Povitsky's famous projects include her recurring role as Maya on the series Crazy Ex-Girlfriend from 2016 until 2019, Brooklyn Nine-Nine, Love, and Parks and Recreation.

For someone who believes that comedy resides in the mundane aspects of human connection, she acknowledges the parallels between many of her characters, including her stand-up persona because they're all a version of herself in some manner. Her onstage jokes about her midwestern background, attention-seeking tendencies, and deep-seated desire for praise, and personally unique way of presenting have made Esther quite interesting to be watched.

“I Want to Date a Guy with an Engineering Degree,” She Said. But Her Fiancé Doesn't Have One

Openly admitting that she's into guys with engineer degrees and her ideal engineer boyfriend would have a nice house and be able to fix anything that’s broken, the laid-back Dollface actress has rather been seen doing more comedy than being into love affairs.

Speculated and rumored to be dating Alone Together co-star Benji Aflalo, the two have made it clear that they are nothing but best friends. Like their characters in the series, she and Aflalo have always been platonic and had to deal with a lot of questions over the years. One of the reasons Povitsky decided to make Alone Together was to show that platonic relationships are not only feasible but also healthy as well exactly like her real-life relationship with Benji. 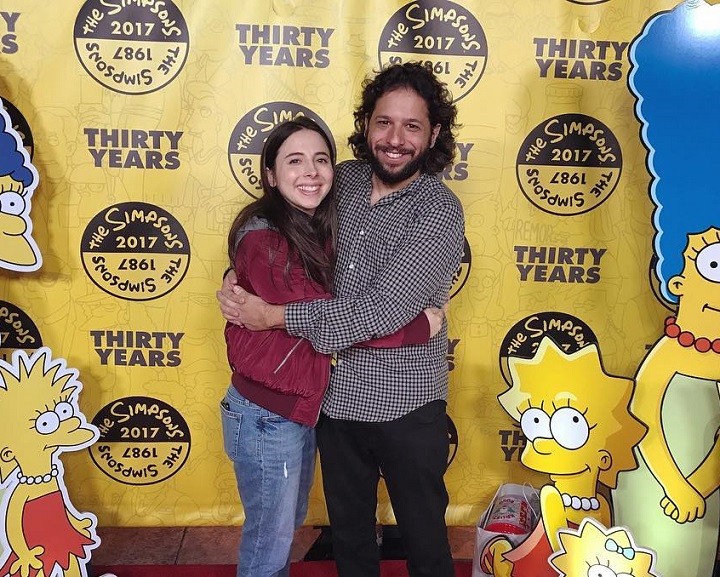 Povitsky is currently engaged with a man who loves his dog.
Photo Source: Dave King, Instagram

The stand-up community has not just given the jovial comedian a place to belong but has also led her to find the love of her life, her fiancé, comedy writer Dave King. Though onstage, she enjoyed making fun of him, but she never mentioned him by name, as she tried keeping him anonymous. It was only since the lockdown that Povitsky's been posting Dave publicly on her socials.

Also: Remember the Comedian, Sarah Cooper, Popular for the 'How to... Trump' TikToks?

The iCarly writer seems to be enjoying her love life with her fiancé mixing up her comedic and sarcastic side as well. Esther can be seen making funny TikTok clips and reels on Instagram featuring Dave. Povitsky describes pressuring King into proposing in Hot for My Name, but two years into their relationship, she admits that weddings are not for her. As Esther said in an interview with Elle, “I’m honestly having second thoughts about getting married at all. I think I’m gonna put him back at boyfriend level, lock it in there.”,  it can be assumed that the pair won't be tying the knot any time sooner.

How Much is Esther Povitsky's Net Worth?

Working as a stand-up comedian, Povitsky earns an estimated amount of $34,000 per year for normal performances. As she works for popular channels and production houses, the stand-up performer's average salary could be around $50,000 per annum from those channels.

A brilliant actress, writer, and producer, the achievements of 'Little Esther' have just been spreading like wildfire. With an estimated earning of over $300,000 per year accompanied by her work in mainstream media, Esther has surely been living a lavish life, controlling an estimated net worth of $8 million as of 2021. Having a hard time dealing with anxiety due to the pandemic and quarantine, for someone who does creative things for work, the sarcastic queen almost spiraled into anxiety when she found out her new hobby, tie-dyeing. “In my fantasy, I want to open a Shopify, where each product is limited-edition. It’s like a business a little kid would do. I ordered a bunch of mailers,” as she says in an interview with Elle. She has now opened a tie-dye business on Instagram under the name sleepoverbyesther. Her hand-dyed garments have surely added more to her assets.

Recommended: Enter Gabriel Iglesias' Volkswagen Bus Collection: How He Bought Every One of Them

Not to forget the incredible comedian's socials, the podcaster has accumulated around 17.5K subscribers in her solo-run channel Esther club. As per her Instagram (esthermonster), she's garnered over 244,000 followers.

Living up to the title of "Big things come in small packages", Esther Povitsky is a woman of multiple talents living the life of a funny TV show we all love to watch.