If you have spent some time on TikTok, then there's a good chance that you might have stumbled upon the 18-year-old aspiring TikTok star, Noor Dabash (b. July 21, 2003). Born in Alberta, Canada, Dabash is renowned for her dance, lip-sync, and SFX makeup videos on the TikTok platform.

The LA-based social media influencer is currently dating TikTok content creator, Bryce McKenzie. Noor, who is of half-Indian, half-Palestinian ethnicity, has an older brother and five sisters. Her older sibling, Daya Dabash is also popular on the TikTok platform as Diya, (@dexxone) and recently came out as transgender.

The Rise of Noor Dabash's Fame and Net Worth

Noor Dabash first forayed into the social media scene through TikTok in the year 2019. She posted her first video on TikTok in March 2019 which went viral and got over 1.4 million views. However, it was not easy for her to stand out on this platform where new talent emerges every day. From dancing to lip-syncs and POV to SFX videos, she did everything to get fame in this industry, and it's finally paid off as she now has over 6.4 million followers. One of her most viral TikTok is the video of her struggling to take out her scleral lenses which got over 9.6 million hearts and 46.8 million views. This video helped her to gain 1 million followers in less than a month. As per estimating sources, the 18-year-old Noor earns around $4,500 per sponsored post from her TikTok page, noor (@noordabashh)

In order to carry on her TikTok fame, she then launched her self-titled YouTube channel, Noor Dabash, on April 21, 2020, where she now has just over 27,000 subscribers and has posted over 45 videos at the time of writing. Similarly, the 5'7" influencer is also active on her Instagram page (@noordasbashh) with 329,000 followers and makes an average of $1,200 per brand endorsed post. Well, Dabash once shared in a video her wish to work with her idol Rihanna and her company Fenty Beauty.

Noor, who is said to be the mix of Avani Gregg and Sabrina Quesada, holds a net worth of around $300,000 - $400,000. In near future, you might find Noor working as an actor, which has been her dream since her childhood.

Noor Dabash recently released a TikTok video accusing her former friend, Nickolas Ray of sexually assaulting her when she was a minor. In the video, she lip-synced to I’ve Had Enough and wrote, “I heard we’re exposing manipulative r*p*sts,” and then shared the screenshot of his Instagram and TikTok handle as well as their conversation where Ray denied the allegations saying, "Noor I would Never do that". Dabash recently shared her full exchange with Ray that she showed in the TikTok video without the hidden parts on Twitter as well.
Photo Source: Noor Dabash, Instagram Story

Dabash then shared a lengthy post on her Twitter account explaining further about her allegations where she iterated that Nickolas raped her on 5th July. The YouTuber also admitted that she wanted attention from home and was also engaged in consensual sex 2-3 times even though she was 17 years old and Ray was 21 years old at that time.

Noor went on to explain how she was intoxicated and had the worst anxiety and panic attack on 5th July 2021 to the point where she was unable to breathe and talk. And when she declined Nickolas's request to talk, he started raping her after which she had "very bad nosebleeding" and went back to her apartment.

Also See: Acacia Kersey Is Completely Off the Internet After the Lightroom Preset Controversy with Ash Levi

Even after this incident, Dabash and Ray still hung out together for some time.  However, when the 21-year-old TikTok star started coming to her apartment without permission, she and her friend banned him from coming to their place.

Noor concluded her tweet by saying how she wanted to slide this incident but decided to come forward in order to stop him from doing the same thing to other girls. While many fans and her fellow influencers have supported her, some people have questioned her proof and asked her to release a formal letter. Meanwhile, Ray has yet to respond to these allegations.

It all started when Noor Dabash and another social media influencer Maya Abdallah had beef after "Maya broke some girl code," and the two started calling out each other on their social media. But when Dabash called her ugly and bug-eyed bi*ch, Maya made a TikTok video saying,

"I have curly hair, hazel eyes, double D ti**ies, 22-inch waist, and no gag reflex. I will f**k your dad, become your stepmom and take your phone, and send you to your room. Don't try my s*it again. Got it."

Dabash then posted the zoomed-in pictures of the body of Abdallah in her personal spam account, not noor (@nardwuarthegoat). The fans were not happy with this behavior and started calling out Noor for passing hateful comments and body shaming Maya. Noor, however, clearly denied body-shaming her former friend and also said that she just debunked Abdallah's fake claims in those now-deleted posts. The situation got so bad that she was nearly canceled for this behavior and even received death threats. What's more, some even started sl*t-shaming her sister and even passed hateful comments on her two daughters.

Dabash also explained the whole situation on TikTok live and even accepted that she had apologized to Abdallah before. The social media star further explained that Maya crossed the line when she dragged her father and her family into this situation. Talking about her childhood, Dabash had a very rough life, and her abusive father was thrown out of her life after being "handcuffed".

Check Out: What Happened Between Madison Miller and Her Husband?

In the live video, Noor also admitted that she had publicly bullied her friend named Dora which she regrets to this date. She had apologized for her behavior to her friend and they are still good friends to this date. Besides, she herself was bullied and was even called "monkey and an ape", and “smelly, curry muncher, sand N-word, terrorist, camel jockey, goat f**ker, a brownie, chee-chee” for being a half Indian. She has also responded to repeated verbal assaults against her sibling's sexuality.

Noor Dabash Is Head Over Heels for Bryce McKenzie.

If you have been following Noor Dabash for a while then you surely know that she is not among those social media stars who is shy to put out her romantic life in public. Instead, the Muslim TikToker loves to share each and every moment of her life with her fans. 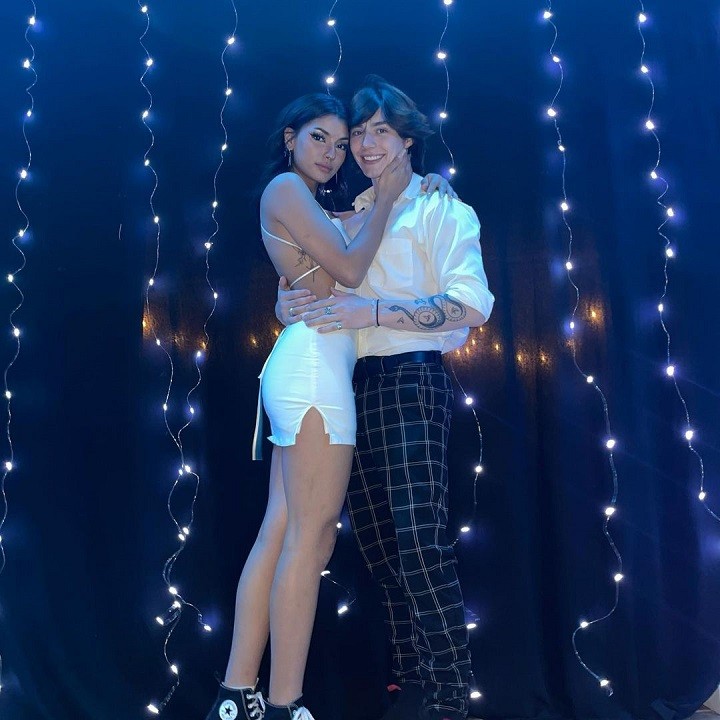 Dabash is currently dating fellow TikTok star, Bryce McKenzie for two months now and has been public about her love life since the start of their relationship. Noor, who was once involved with Nickolas Ray, has expressed her gratitude for Bryce's love and support time and again. She recently tweeted out that she was even visiting McKenzie's parents. Talking about McKenzie, he previously dated Riley Guerin.